FREE SHIPPING on all orders $45+ in continental USA 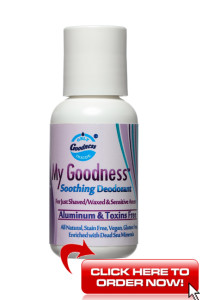 What is the Best natural deodorant for women?

Women consumers often ask for more from their deodorants than simply nice smells or a powerful antiperspirant.  Instead, they want something which is easy on the skin, and does everything that a standard commercial deodorant does, without harming the environment and without causing problems such as aluminum poisoning.  However, they are also influenced by advertising which makes them want something effective, but also fragranced.  Therefore, when women are looking for the best natural deodorant, they are really seeking something out of the ordinary, neither commercial and synthetic, nor too eco-friendly to be really effective as a deodorant.  This means that they need to be able to find the best combination of both the supermarket best-seller and the all-natural deodorant.

Looking for the best natural deodorant for women means understanding why a woman might want to go natural when she looks for something to protect her against body odor, and also to provide a pleasant smell in place of BO.  While commercial deodorants have been shown to be effective in preventing odors, they are also known to contain a number of products which can poison the system and make a woman feel unwell. Some products contain estrogen-like chemicals which have been indicated as a source of breast cancer in vulnerable women.  Other reports name a link between the aluminum which is present in most commercial products, and diseases such as Alzheimer’s.  Women who are aware of these problems are likely to look at other products.

Finding the best natural deodorant for women does not end there, however, because a woman will need to decide exactly what she does want from her natural products.  For example, she might want products which are unscented, meaning that she can avoid the risk of skin irritation.  If she has a skin problem, such as eczema, then perfumed fragrances might cause her condition to worsen.  Most deodorants in stores use chemicals to create fragrances, which can irritate vulnerable skin and which are also absorbed into the body through pores.  Rather than go down this route, women are better off choosing a deodorant that avoids chemicals altogether.

While she can select unfragranced deodorants if she wishes, another option is to look at natural anti-odor products which contain a small amount of natural scent. There are several positive reasons for choosing this method, including the fact that most scented oils including lavender, peppermint and Ylang Ylang, are anti-bacterial.  Bacteria are the source for unpleasant scents, so when the woman is trying to combat smells and odor the use of essential oils helps to mask the smell of sweat, and keep body odor at bay.  Essential oils also have positive effects on the body, and can be used to help the skin recover from the effects of commercial deodorants.  The majority of these scents also use some form of vegetable butter, such as Shea or coconut, in order to provide a smooth application.  Most of the best natural deodorant types for women have these ingredients in them.